Is "food addiction" a form of disordered eating?

留言 3 收藏 0 推薦 0
Are you a food addict? Certainly all of us have had the experience, at one time or another, of being unable to resist eating more than a recommended serving of cookies and cream, coconut custard pie, or chocolate anything. If you’re a big fan of sugary snacks and desserts, or you love fried foods, for example, you know how strong the urge can be to devour extra helpings of “forbidden” foods. You may even joke about your cravings as you find yourself thinking about little other than your next indulgence and feeling as though you have no control over how much you eat. 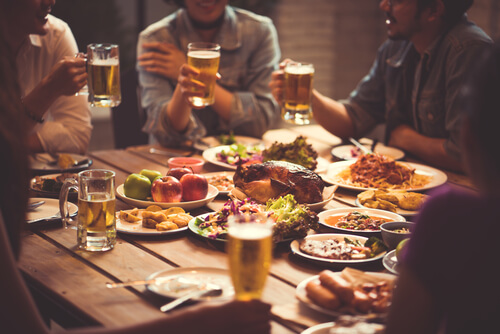 Does that mean that food is your “drug of choice,” as Oprah once admitted about herself? Are you a "food addict" if you knowingly eat calorie-dense (and often quite delicious) but nutritionally questionable foods that can contribute to weight issues and could potentially harm your health? Are you a "food addict" if you overeat any foods for the sake of comfort and pleasure, however fleeting?  It depends on who you ask.
Some scientists say overeating “junk” food, or fast food, actually changes your brain wiring to the degree that you lose your ability to resist these foods—even when you know they have a negative effect on your well-being and are likely to play a role in the development of heart disease, diabetes, and other chronic medical conditions. Compare your food behavior to that of someone with a substance use disorder, and you may find similarities: Do you feel deprived when you can’t have certain types of food? Do you make a concerted effort to stay away from certain foods, only to relapse as your cravings build up? Do you routinely eat unhealthy foods even though you know they can potentially make you sick? If you answer “yes” to these questions, you have some traits similar to that of someone with a substance abuse disorder.
For years, researchers have shown that high-calorie, sweet, and fatty foods can cause changes in the structure and circuitry of the brain. Studies show that many regions of the brain, including those involved in anticipation of and the satisfaction derived from rewards, are altered in similar ways by drug use and by consumption of certain high-carb and high-fat foods—and especially combination foods that are rich in both carbohydrates and fats.
Still, many experts question the validity of equating any habits of overeating, even uncontrollable eating behavior, with habits of drug (or alcohol) addiction. They suggest that strong cravings for certain topplay foods may be linked to biological drives that vary among different people, but that they are not the same as the uncontrollable cravings someone with a substance abuse disorder feels for drugs.
These experts question the idea that indulging in such food cravings has any connection to any known neurological or biological abnormalities that contribute to substance abuse disorders; rather, they say, it could be a problem with impulsivity and self-regulation. Food addiction may resemble substance addictions in some ways, they acknowledge, but there is no solid or convincing evidence to back up any claims that any foods have the same mechanism of action on the brain as addictive substances.
It can be said that much of the debate surrounding the concept of food addiction lies in the similar terminology used, as well as one’s definition of “addiction.” If you cannot control your urges and constantly give in to cravings for unhealthy food and, on your own, you cannot change your eating habits, the term “food addiction” may well describe your feelings and concerns and, potentially, your need for help.
Is "food addiction" a form of disordered eating, a compulsive behavior, or actually comparable to drug addiction? Is it a real thing? Those questions never been answered to the satisfaction of many experts. But the many individuals who routinely experience uncontrollable urges to eat high-cal, low-nutrient foods would likely answer “yes"—and their votes count. There may be no empirical evidence to back up the claims of those in therapy, recovery, and food addiction support groups, but research into the similarities and differences between food addiction and substance addiction should continue—and stronger evidence may be yet to come.